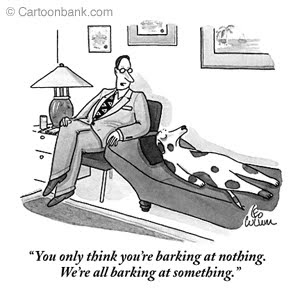 You know the saying, her bark was worse than her bite? Well let me tell you something. When I started writing for my student newspaper's Arts & Entertainment section, I was eager to jump in head first. The only problem was that the ideas I was pitching either weren't accepted by my editor or once I'd finished writing them, they got rejected for the print version. I was like a little yapping dog who wanted to play, but no one would take me seriously.

Don't get me wrong, a few of them did finally make it to print, and I did understand that the A&E section had a huge space issue. Most of it usually went to the "hardcore" news, not so much what movies people were watching that weekend. But when I started to analyze the pieces that were making it into the paper, I realized that most of them were written by a select handful of writers who had more...bite... than I did.

What I mean by that is they had this sort of sharp wit and sarcasm that I felt that I was lacking. They didn't simply recap or praise the student production of Hair, they tore into it! They threw in every zinger they had in them, even if it meant actually insulting people from time to time.

I started to wonder, if I'm going to get myself noticed around here...do I need to start biting?

Soon after I pondered this, I was asked to recap the VMAs. That was the year that Britney Spears had her "comeback" and Russell Brand made his debut in America. I remember thinking, how am I going to set my voice apart? As a result, the piece I ended up with was little more than a string of insults that I felt were witty and clever enough, but I didn't actually mean.

In truth, I felt a little guilty about some of the things I was saying. Sure, they're celebrities and they've seen their fair share of criticism. But to me, it was about more than that. It wasn't me. I'm really not the sort of person to put others down, and my preference will always be to praise rather than ridicule. Even if that does mean a slightly less interesting news article.

The funny thing is that my "zinger" wasn't even published in the print version and shortly after that, I did get a few of my pieces in -- ones that weren't laden with unnecessary criticism!

In the end, I learned that some dogs aren't meant to bite. Some are just meant to curl up on the couch and cuddle with you...and tell you you're awesome. Because you are.

February 19, 2019
Let us all rejoice for reaching the third week of February! I say rejoice because it's almost over and because February is the month I've come to refer to as the "blah" month. At least where I live, it's the month where the temperatures reach their most frigid and all that beautiful snow you were hoping for at Christmas time now finds its way to earth. Only now you don't get a White Christmas, you get slick roads without a merry excuse to stay home. What I find most interesting at this time of year is how motivations begin to decline. Goals that a lot of us set at the end of last year begin to lose their luster. For me, February weather has an especially powerful effect on my creativity. This time of year, I just don't have the same kind of creative mojo and motivational energy that I feel in the warmer months. When you think about it, it kind of makes sense. When the weather gets crummy we hole ourselves up for protection and as a result we can get a
9 comments
Read more

June 16, 2020
Happy blog hop day, everyone! I hope that your writing has been both fun and inspired. While I missed last month's hop, I have been in the thick of what will (hopefully) be my final round of revisions before querying my current novel. Hooray! In case you missed my video recapping my first beta reader experience , my novel has undergone a couple of major changes these past few months due to the feedback I received. It was an incredible learning opportunity for me. I truly believe that, thanks to my beta readers, I was able to resolve issues that would almost certainly have come back to bite me during the querying process. Whether I was saved from agent rejections remains to be seen, however, through this process I learned things about my writing and this story specifically, that I would not have otherwise. And for this reason, I highly recommend reaching out to beta readers before considering querying agents. That being said, I wanted to gather my thoughts into a post that co
13 comments
Read more

February #AuthorToolBoxBlogHop: 15 Relationship Archetypes to Inspire Your Next Story

February 16, 2020
In honor of February, I wanted to dedicate this month to relationships. More specifically, how to write relationships in fiction.  And while we may not all be writing romance, relationships are a vital element to any work of fiction. How our characters interact and what bonds them is key to writing a story that draws readers in and keeps them invested in what happens to these characters. In this post I've compiled a list of 15 different archetypes that you can use to jump start the relationships in your story. And while of course not all relationships are romantic, I made sure to include platonic and familial relationships that can add another layer of complexity and strengthen your plot. I like to think of archetypes as building blocks that function as a foundation that you can work upon to design elaborate and unique story ideas. Using examples of established concepts that have worked in other stories has been incredibly helpful to me in learning what works in storytell
10 comments
Read more